A former teacher and rugby coach was sentenced for 27 counts of indecent assault to 23 schoolboys aged between 12 and 17 at Terenure College in South Dublin between 1973 to 1990, as reported by the Independent.

From 1966 to 1996,  Mr John McClean (76) of Casimir Avenue, Harold’s Cross, Dublin, worked as an English teacher and rugby coach at the prestigious school for young boys run by the Carmelite Order.

McClean was also in charge of the costume fittings for the school plays. A role in which he abused his position of trust and used as an opportunity to abuse 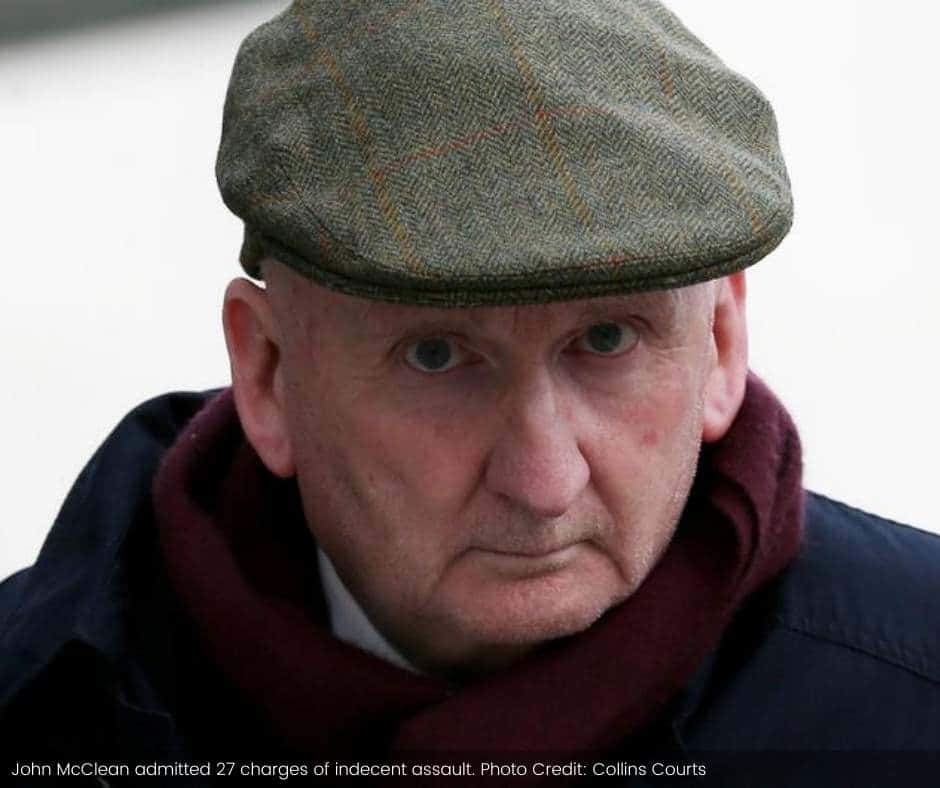 pupils. He was removed from this position in 1979 after allegations of abuse had been brought to the school’s attention by a victim’s father. However, only some years later in early 1980, McClean was appointed as the first-year headmaster and was given his own office.

McClean ultimately left the school in 1996 after further allegations was made against him. The Criminal Circuit Court heard that according to the notes recorded by the Prior Provincial of the Irish Carmelites at the time, Father Robert Kelly spoke to McClean regarding an abuse allegation reported by a pupil’s father in the summer of 1996. The diary recorded that McClean had admitted to the abuse. The school then told McClean that he could no longer continue teaching in Terenure College, as reported by Irish Times. Terenure College granted McClean a three year career break and McClean went on to coach rugby in UCD.

When McClean was first interviewed about the complaints in 2018, he denied all allegations of abuse. However, in November 2020, McClean was arraigned on 27 counts of indecent assault and pleaded guilty.

Evidence from the 23 victims was heard in the court over a three day period. Across the victim impact statements, a resounding similarity of abuse tactics was mentioned, such as groping the children’s genitals, buttock and back, ultimatums between accepting his “punishment” or their parent’s punishment, hitting and touching on the buttock with a ruler and then touching the victims inappropriately afterwards, molesting the victims while denigrating and saying inappropriate things to them, inducing fear and shame. The locations of the sexual abuse committed by McClean was always on the grounds of Terenure College.

One victim was abused in the mid-1970s, in the changing room of a concert hall as the 12-year-old boy was trying on his costume for a school play. The young boy was wearing a dress for the school play and McClean told the child to remove his underwear before sexually abusing him.

The victim is now 58 years old and said that “everyone in that school, despite their constant nods, knew McClean was an active paedophile”.

McClean molested another schoolboy during a costume fitting in the late 1970s. He was 16 years old at the time. The victim recounted McClean taking him to the dressing room of the concert hall, where he rubbed against him while fitting the child’s costume. Afterwards, the boy returned to class feeling “dirty and ashamed”. He later realised that his English teacher groomed him as a teacher’s “pet” and picked him for the big role in the school play.

One of the victims described McClean as a “grotesque and manipulative” man hiding behind his “mask respectability and cloak of authority”. He also described McClean as a “monster in disguise” who is “depraved, calculating and ill man”. The 12-year-old boy was abused in McClean’s office in the 1980s. It became more difficult for him because the perpetrator would be in his home in later years as he was involved in his relative’s sporting career. He told the court that the school should refund the full school fees to the parents of the victims.

Another man mentioned his fear of possibly more victims than just 23 complainants. He questioned, “Are we the tip of the iceberg? I fear so. If one teacher got through this many cases, you can only wonder” how many other abuse allegations were not uncovered.

Monetary compensation is achieved through civil proceedings, and it is a different process to criminal proceedings handled by the Director of Public Prosecutions and An Garda Siochana.

Coleman Legal fully understands and appreciates that any form of abuse is extremely distressing. We deal with each case on a personal, one-to-one basis with compassion, empathy and understanding.

Our dedicated team has extensive experience with claims relating to Sexual Abuse and Harassment. If you have experienced sexual abuse perpetrated by John McClean during his tenure in Terenure College or have experienced abuse in similar circumstances, please contact Ciara Redmond either by email or freephone us on 1800 844 104.