A DEFENCE FORCES whistleblower has made a protected disclosure alleging that a number of children of Air Corps workers have died as a result of being exposed to toxic chemicals at Baldonnel Airfield, reported in The Journal.

The State Claims Agency is currently managing six claims taken by former and current members of the Air Corps for personal injuries alleging exposure to chemical and toxic substances whilst working in the Air Corps the period 1991 to 2006.

During a debate in Dáil Éireann, Deputy Lisa Chambers stated:

“We have received quite worrying reports of practices and, to use one of the terms mentioned, “practical jokes”. Something known as “tubbing” was reported, for example, which is where new recruits were tossed into baths full of unknown chemicals as a joke and an initiation process. There is a culture in that regard. There is a lack of appreciation of the ongoing dangers associated with these chemicals. Also worrying is the fact that many people are reporting now that they presented with symptoms and health issues to medical doctors but were not given the assistance or help they needed. The connection was not made, or perhaps they did not wish to make it, between their work with the hazardous materials and chemicals and the health issues they faced. Some of them continue to experience severe health problems. This speaks to the wider issue of adequately resourcing essential capabilities in the Defence Forces and resources in the Air Corps.”

The chemicals used at Baldonnel Airfield included the highly toxic Ardrox 666 and Ardrox 670.

Other chemicals which have been used at Baldonnel include:

All these chemicals have been proven to cause serious damage to humans after long-term exposure.

The whistleblower states that they have uncovered:

“the untimely deaths of at least 20 adults…of which I believe died of illness related to unprotected chemical exposure”.

A 2016 inspection by the Health and Safety Authority (HSA) identified a number of shortcomings at Baldonnel with corrective actions then taken by the Defence Forces in relation to how it handles such chemicals.

The number of miscarriages suffered by partners of the Air Corps employees appears to have been markedly higher than verage, including one retired member’s wife who had eight miscarriages in succession, and three personnel who shared in an office in ‘photo section’ (area of Baldonnel’s engineering wing) whose wives all had a miscarriage in the same six-month timeframe, according the the whistleblower.

The whistleblower, with the permission of the children’s parents, has claimed that : 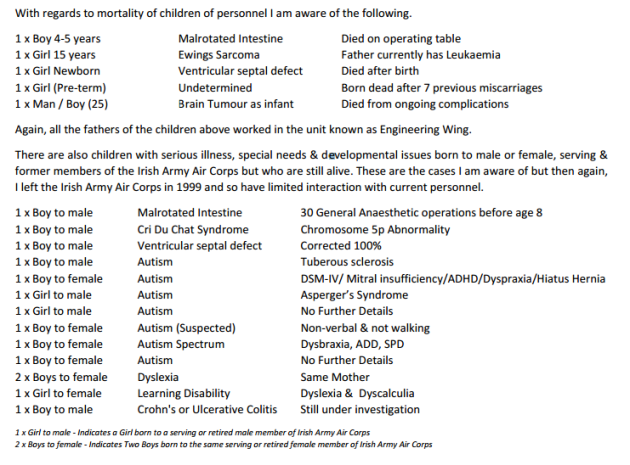 The State, the Attorney General, and the Department of Defence  are facing at least six separate legal actions from former members of the air corps who allege they have suffered serious illnesses as a result of “chronic exposure” to the chemicals they came in contact with as a part of their daily duties during their employment at Baldonnel.

Both military and civilian employees, and some of their children, who worked at the air base from the 1990’s have suffered illnesses which they claim are due to toxic chemical exposure.

Some of the illnesses allegedly suffered include:

A toxico-pathologist quoted in documents submitted to the High Court alleges former air corps staff members’ exposure not only caused existing medical complaints, but also puts them at risk of “the possible onset of Alzheimer’s disease and a variety of cancers”.

Personal injury claims submitted by the staff state they now suffer from a number of neurological issues due to their time working for the air corps including:

The cases taken against the State are by staff who joined the air corps in the 1990s as teenagers who went straight from secondary school to work as apprentices in repair and maintenance workshops in Casement Aerodrome, Baldonnel; the plaintiffs noticed unusual symptoms while based in Casement, and sought medical advice from the Air Corps doctor. All claim that no connection was made between their complaints and their work with dangerous chemicals.

Meanwhile, the work-place safety watchdog has threatened to prosecute the Air Corps unless it addresses shortcomings in how it protects its staff from the effects of harmful chemicals.

The Air Corps has conceded that it will place “stricter controls” around the handling of carcinogenic chemicals.

Last year, the Health and Safety Authority (HSA) visited Casement Airbase in Baldonnel, Co Dublin, several times to inspect the premises. A report by the HSA to the air corps last October raised several health and safety issues that the authority said were in need of “immediate attention”.

The recommendations of the HSA include:

“Failure to comply with this advice and relevant legal requirements may result in further enforcement action including prosecution,”

In a reply last month, the Air Dorps said it is “fully committed to implementing the improved safety standards that protect workers from potential exposures to chemicals and will ensure risks are are low as reasonably practicable”.

“Carcinogenic and mutagenic chemicals will be subject to more stringent controls and these controls will be fully documented,” Comdt Mark Donnelly, the Air Corps formation safety adviser stated.

“Chemical awareness training and promotion of chemical safety will now be included in the annual training plan.”

Air Corps Chemical Abuse Survivors – A support group for members of the Air Corp who have suffered as the result of exposure to toxic chemicals.